WHO or WHAT REALLY CONTROLS YOU?

Letter To the Führer and Reich Chancellor Adolf Hitler

Written by a German soldier named Anton Weiler. Because there are other documents, I know that he was with the S.A. then a RAD leader and finally with the staff of the Reichsführer-SS. All eleven pages are not translated.

To the Führer and Reich Chancellor Adolf Hitler

On 5. January 1943, I handed over to you the written report "Failute to comply the merit principle". Afterwards, On 15. January 1943, I received a letter by the Chancellery of the Führer of the NSDAP, saying that the receipt of my letter was confirmed and that my letter was forwarded to the German labor front headquarters in Berlin in the Potsdamer street 180/82. This letter was taken by the Office leader and forwarded to the Head of the German Reich labor front (Konstantin Hierl). In my letter to the Fuhrer, I described the unbearable circumstances in the German Reich labor service. To proof that my statements weren´t exaggerated and that the handling of those are urgent, I feel obliged to report following additional: On 6. January 143, I arrived for my service in the German Reich service office 2/95 in Trebbin where I was commanded to. After my arrival, an old comrade, a Unterfeldmeister reported me about his misery. He is a labor service member since 10 years and responsible as Quartiermeister for the catering of the men. He told me that he always fulfills his duty, but he has to suffer like any other soldiers in the labor service. He was commanded to a unit where too much meat and butter was stored and he was ordered to get everything in order. He was harrased because he wanted to give more coffee to the leaders than allowed. The one leader requested coffe and another leader asked for the whole pork sausage after a swine was slaughtered. Other leaders just took food for private use or for their vacation and other leaders celebrated parties drunk too much and played cards during a war operation......This man further told me that a Oberfeldmeister named Vogt said about me to his Obergruppenführer, "We will dismiss him soon". I assume that this Oberfeldmeister will dismiss me because of my complaints against these circumstances.

page 3: Although this Oberfeldmeister has a bad reputation, he stayed with this unit and I was punished with a 14 days arrest. The Head of the German Reich labor service personally ordered my arrest as following:

The Head of the German Reich labor service

I punish the Oberfeldmeister Anton Weiler because of bypassing official channels, threat and publishing of official matters with a 14 days arrest.

Well, I just feel guilt y in one matter. My Gruppenführer had a affair with a 19 year old girl, although he is an older man and married. Before he met this girl, I was close to her. The Gruppenführer knew that I was informed about his affair and I made it public. I know that this was a fault, but this has nothing to do with the damage on the national ethnic community, committed by several Reich labor service leaders. My act was not wrong and this punishment is very unfair. No national comrade may be punished that hard just because he publish crimes against the interests of the German people without using official channels.

even German reich Minister Thierack said that according to the order of our Führer, every German has to follow the rules. According to my penalty notice, all these RAD leaders and its misbehavings are called as irregularities. It is also an irregularity if a high unit leader steals 3400 liter fuel and 200 liter oil for private purposes which is urgently needed for the fighting soldiers at the front. It is just a irregularity if young fighting soldiers don´t get food because food was only provided for leaders. My labor district leader told me 14 days ago, that such misappropriations are not that bad. The bad verbal attacks against Obverfeldmeister Mölders who is the brother of Colonel Mölders and who was personal welcome by German reich Marshal Hermann Göring are more worst. If a common German fellow steals a few food ration coupons, he immediately gets sentenced by the people´s court, but leaders always get its freedom after committing bad crimes and they even will get a promotion.

We all obviously should be quiet when high leaders commit crimes, thefts and who do not follow the order.

We obviously should be quiet if high leaders use fighting soldiers to carry their baggage. We should be quiet and accept hard punishments. It is absolute the contrary what we tell and educate to the German youth, concerning the national socialism. It is also a lie if leaders state that we make their work harder. It is the contrary and they do not appreciate our performances. There are many young, just 17 year old soldiers, but they are afraid to complain.

...who was offended by the Head of the German reich labor service, namely by Konstantin Hierl who also offended the General labor leader von Wenkstern. Hierl even ordered Mölders to his personal staff 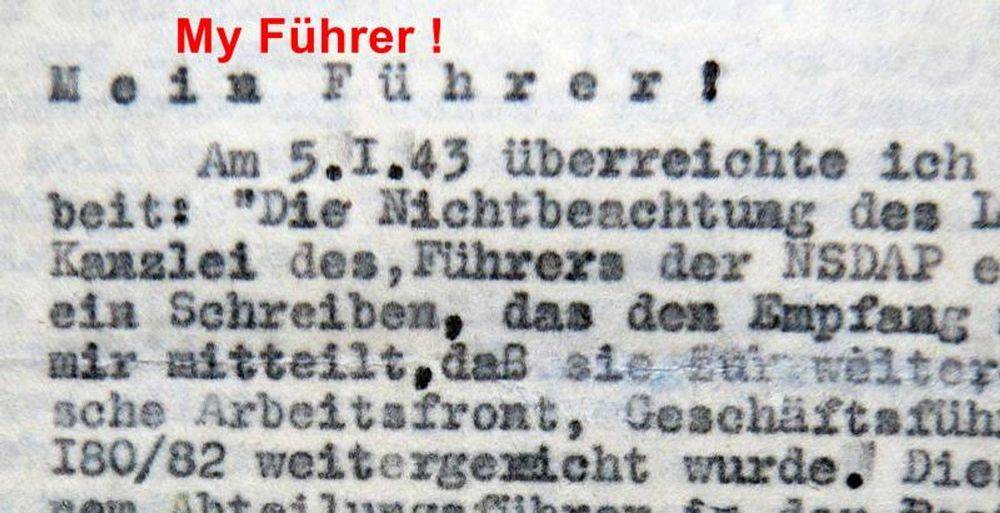 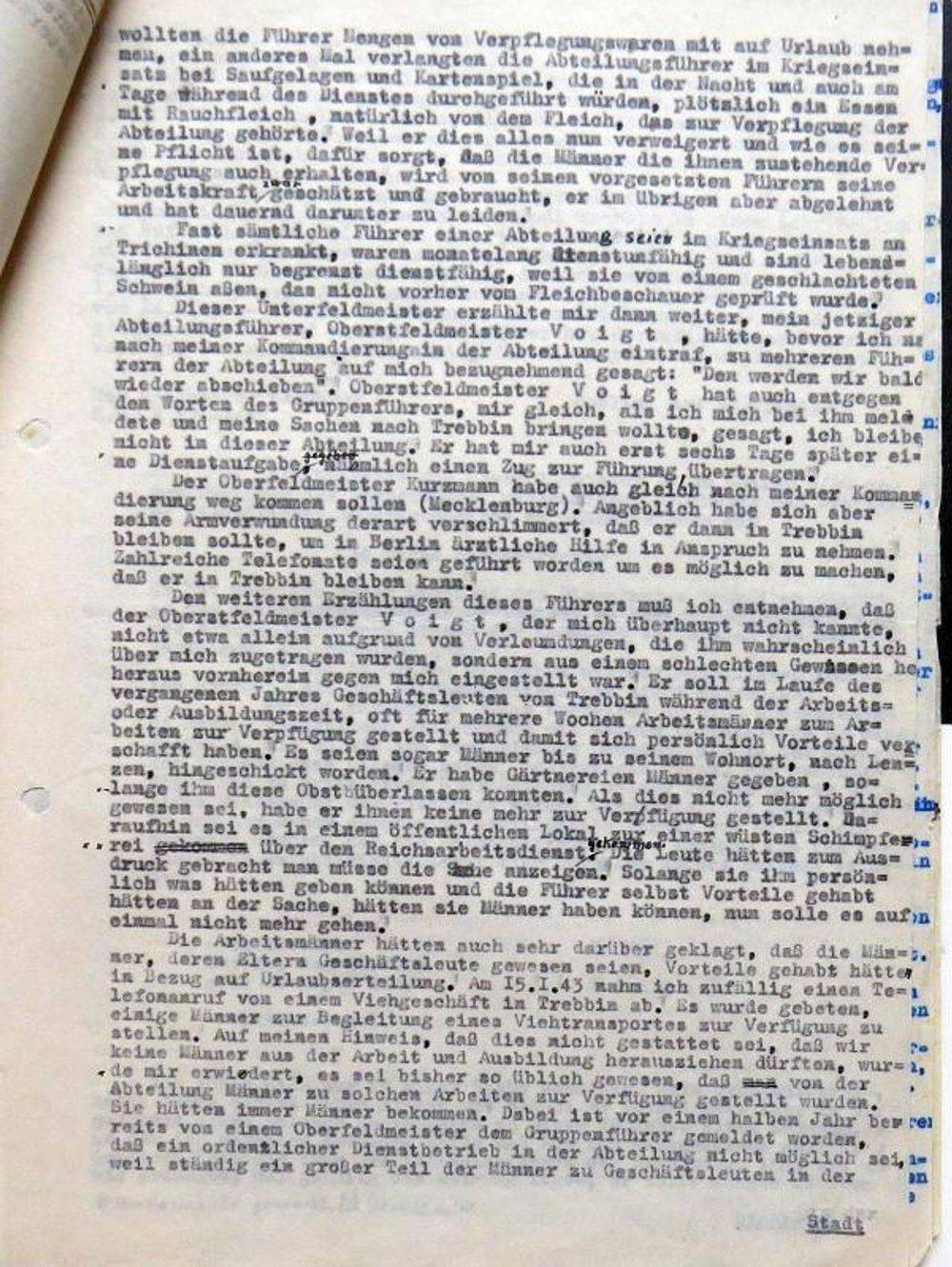 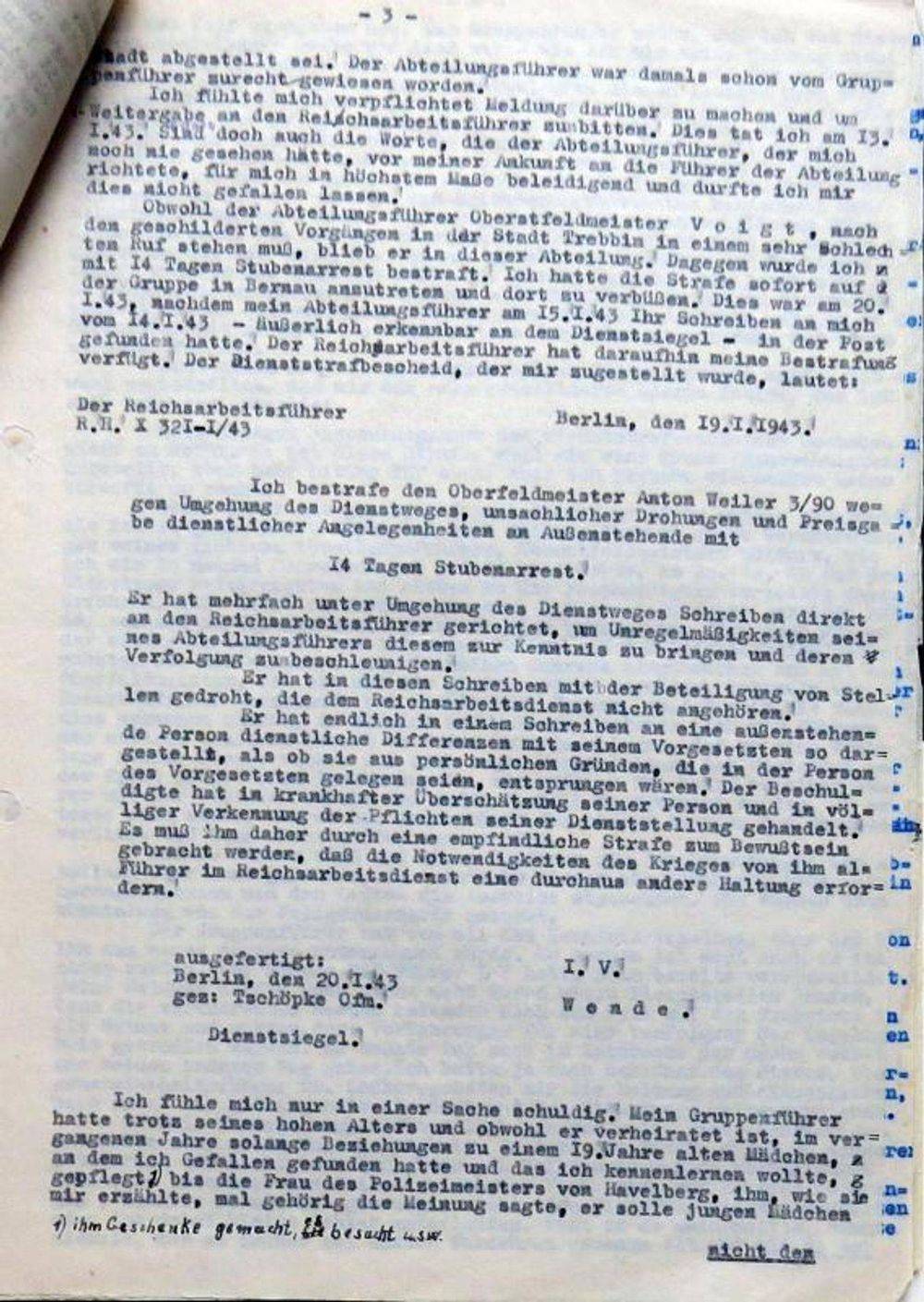